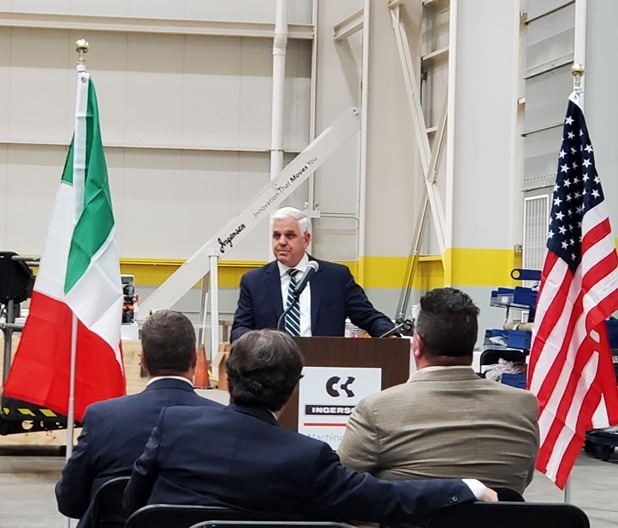 Earlier in the year, Jorgensen delivered a massive conveyor and filtration system to Ingersoll for use in manufacturing the Giant Magellan Telescope.

The Ingersoll machine, located in Rockford Illinois, is said to be the largest and most advanced 5-axis milling machine in North America. Our system manages all the chips and coolant resulting from the milling process to build telescope components. Two horizontal conveyors, 134 ft long each, run the entire bed length of the mill to collect chips and stringers. These conveyors then feed an elevating conveyor that takes the chips 20 ft up and out of the building. Under the elevating conveyor, a large tank collects coolant before it flows to the gravity media system at floor level. Chips are collected outside the building for recycling, and clean coolant returns directly to the mill for reuse.

Once assembled, the telescope will be located at Las Campanas Observatory in a remote mountain desert region of Chile. The Giant Magellan telescope project is funded from a variety of science institutions, governments, and private donors. It’s next-level technology, with resolving power up to 10 times greater than the Hubble telescope, will enable discoveries in cosmology, dark matter, and dark energy. They expect the telescope to be up and running by 2028.

Our employees were privileged to attend an open house at the building created to manufacture the Giant Magellan Telescope. One building houses the machine with Jorgensen’s system that will machine the components for the telescope, and another portion of the building will be used to assemble the GMT components.

The main speakers were the president of Ingersoll (Jeff Ahrstrom), the president of the Camozzi group – parent company of Ingersoll (Chip Storie), and the US Assistant Secretary of Defense for Sustainment (The Honorable Christopher Lowman), who is the gentlemen in the picture. This machine will not only be used to build the telescope but is also designated to manufacture US defense equipment going forward.

We are honored to be part of such a large-scale international project set to broaden our views and understanding of the universe. A very proud moment for both Jorgensen and US manufacturing!